Color Vision of a Conscientious Objector 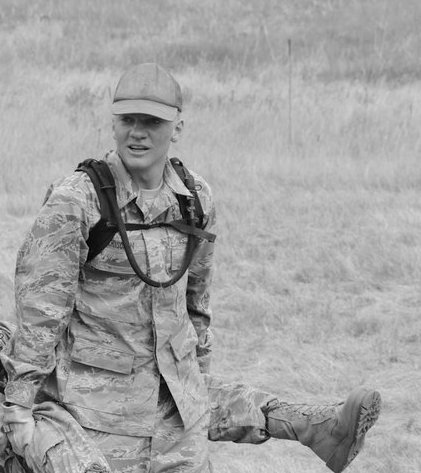 The picture above captures me frantically running around during basic training at the Air Force Academy (Summer 2010). I had heard that it was said, “war is an ugly thing, but not the ugliest of things.” I also believed in the Bible, but it seemed to be lacking color.

It is hard to forget the summer after my first year at the Academy. After an arduous freshman year at the base of the Rockies in Colorado Springs, I received the sweet reward of visiting one of my dearest friends from growing up in Quito, Ecuador as a “missionary kid.”  As we sat at the dinner table his family asked me what the Academy was like and my instinctual response involved performing air push-ups while seated and spewing John Stuart Mill’s famous words from the depths of my mind. Everyone had a good laugh and pointed out the extreme evidence of my thorough brainwashing. My first year of college had cleverly customized my core.

Just war quotes did not always flow freely from my mouth. I had examined the differing views on Christian participation in war only one time, for a high-school English essay. To be honest, the default position on the Christian attitude regarding war embedded the conclusion to that essay far before I gave credence to unbiased research. Throughout high-school I had developed an interest in service, and the time quickly came to fill out those frightful college applications. I fervently populated application forms with my dreams of grandeur and used lines like, “I desire to be part of something far bigger than myself.” I wanted to be a world changer and my dreams neatly fit through the military door I perceived God had opened. The Academy seemed a world away, but off I flew.

During my sophomore year at the Academy something began to itch and stir. I flew down to visit my parents who had moved to Haiti. Witnessing the intensity of need and suffering in that earthquake-stricken country drove me to a fretful realization that I lacked a vision for my education. In response, I postponed the Academy and flew off to Mozambique to work with a Christian non-governmental organization.

My time in Africa culminated with me standing in a crowd of expats staring at a recently opened hospital. The wards were full, but there was not nearly enough medicine for the patients, and the administrator struggled to find food for his own staff. I had spent countless hours trying to get this hospital in operating condition after flooding, but I felt frustrated and fruitless. My efforts seemed to have no impact. I got on another plane with my tail between my legs and flew to my family in Minnesota.

When I returned to the U.S. I reapplied to the Air Force Academy and considered some other options for college. I even had some time to ask the people around me what they thought about Christians serving in the military. With one lonely exception, the voices collectively recited the default position I had always heard. I heeded the majority position and off I flew back to Colorado.

During my last two years of college I developed great friends, did well in school, and bounced around churches.  But, to be honest, despite a desire to walk in holiness and purity with the Lord, my life was a perfect illustration of the lukewarm believer. This spiritual sloppiness carried forward with me as I moved on to Massachusetts to attend Harvard’s Kennedy School of Government for graduate studies.

Graduate school bombarded me with new experiences and ideas. Although finding a church was at the top of my priorities, I always found a reason to move on to the next thing. I pressed forward with my studies and placed my hope in the plotline of my career, but I could not shake a sense of spiritual disarray and loneliness.

One fateful morning I walked into a biblical Greek class offered in Harvard Yard taught by Dr. Finny Kuruvilla. He informed the students that reading the Bible in Greek is similar to reading passages in full color instead of black and white. I am colorblind so this hooked me. As I endeavored to study the Bible in its original language something surprising happened: I found a church fellowship who strove for obedience to God’s word, and I learned about early Christianity. The things I began reading made complete sense in a stunningly obvious way: the early Christians took the scriptures literally and seriously and did not provide contrived explanations to dismiss demanding teachings. They stood for non-resistance and peacemaking (Matthew 5:33-48). It is difficult to identify a piece of evidence that summarizes over 300 years of early Christian writings, but even the the Council of Nicaea presided over by emperor Constantine affirmed that Christians had cast aside their military girdles in response to Christ’s call (read the 12th Canon), placed their hope and efforts in His church, and chose to sacrificially serve those afflicted by war and injustice (1 Timothy 2:1-4). I could not say the same.

An internal earthquake kept me up at night for months thinking about the implications of Jesus’ summons and the gospel of His kingdom. My whole life I had placed my hope in the plot of my career aligning with God’s will, but I had neglected simple truths. After a period of discipleship and fellowship with a faithful people, I had no excuses left to ignore the simplicity of Scripture. My sentiment echoed Martin of Tours, an early conscientious objector, “Hitherto I have faithfully served Caesar. Let me now serve Christ.” I could not continue in military service and take an oath of allegiance to words that contradicted a Nazarene with the eternal perspective.

I explored different avenues to leave the military, but for a legion of reasons, applying as a conscientious objector and possibly taking on educational debt was my only option. Large cups of coffee got me through long nights of assembling a sixty-page application to leave the Air Force. My heart pounded in the moments leading up to the official submission of my application; there was no going back. On the one hand, it was agonizing to share my new convictions with many people I love, respect, and cherish who dutifully support and serve in the military.  But on the other hand an overwhelming confidence and peace surrounded a new-found hope in the story of the Messiah who conquered evil with love. The high-school dreams of grandeur I chased throughout college and beyond pale in comparison to living as citizen of His kingdom.

After a brief period at a base in California following my graduate studies, the Secretary of the Air Force approved my request for separation, and I received an honorable discharge.

The decisions high-schoolers make will follow them forever. During college my thirst for righteousness was slowly quenched with laxity and other distractions I chose to follow.  I wish I could replace the many hours I spent in devotion to government training with prayerful study of Scripture. Since I cannot, I will do everything I can to persuade others to learn from my mistakes and strive to compensate for lost time. I can say with confidence that out of all the kingdoms, states, governments, and military strategists I have studied, the empire that Jesus founded upon love is the greatest. I now seek to serve Christ through being a part of Sattler College and raising an army to bring forth His kingdom to all nations.

In the picture above, an overwhelming joy had come over me by the time Dr. Kuruvilla was called to be a witness at my conscientious objection trial (3:41 pm on April 13, 2017). Many voices had vied for my attention in this journey but now Jesus’ words rang loudest of all: “love your enemies and pray for those who persecute you.” The simplicity of Scripture had at last filled my faith with color.

The Testimony of the Persecuted Cloud of Witnesses

Color Vision of a Conscientious Objector